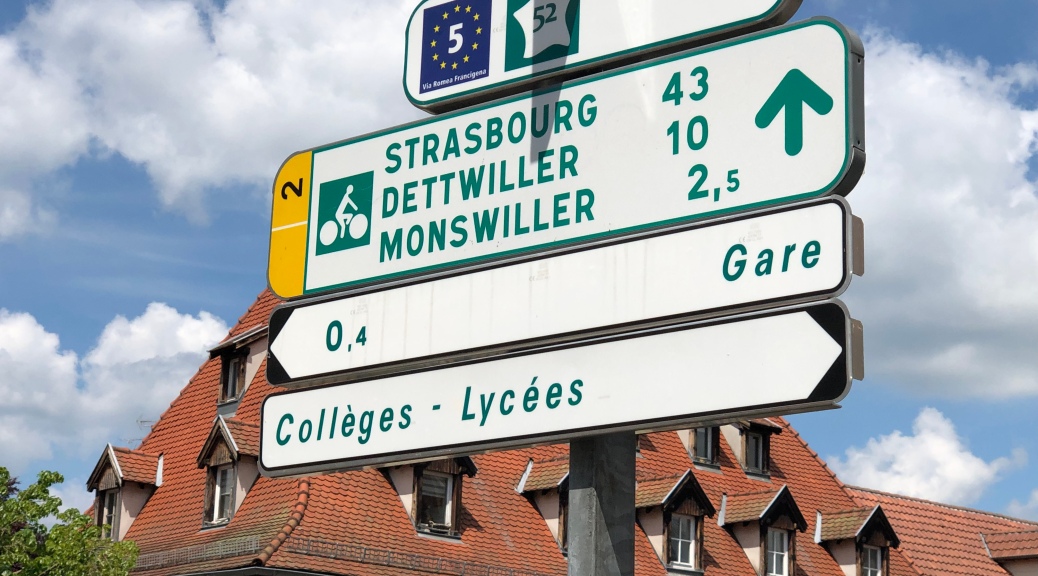 Sun. Nothing much else to say really. Will disturb folk, but today was sunny, the riding was awesome, and Strasbourg is excellent.

The day’s riding consisted of 3 parts. Riding the Saar canal through the valley, crossing over into the Moselle valley and through the Vosges Nord, then riding the canal (Bas – Rhin) from Salerno to Strasbourg. 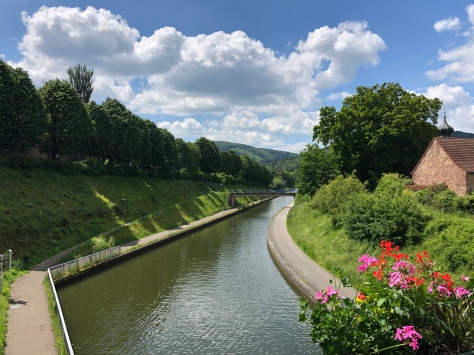 We set off a bit late, largely because we knew we had less distance to cover today (65 miles) – and within around 5 miles were on the Saar canal – awesome. Canal path cycle routes have one majorly redeeming feature – they are flat. So the first 20 miles was just the start to the day we needed.

As we dropped down into the Saar valley and crossed the river at Starr-Union we knew we would have around 30 miles of climbing to contend with. Not least the Vosges Du Nord. First thing first though – some brekkie. 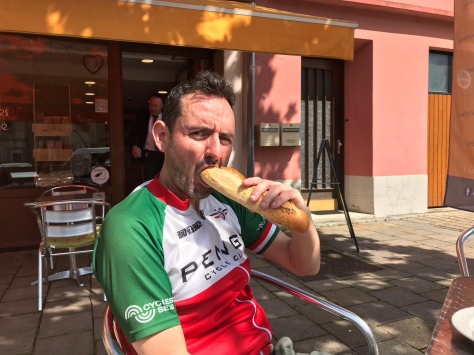 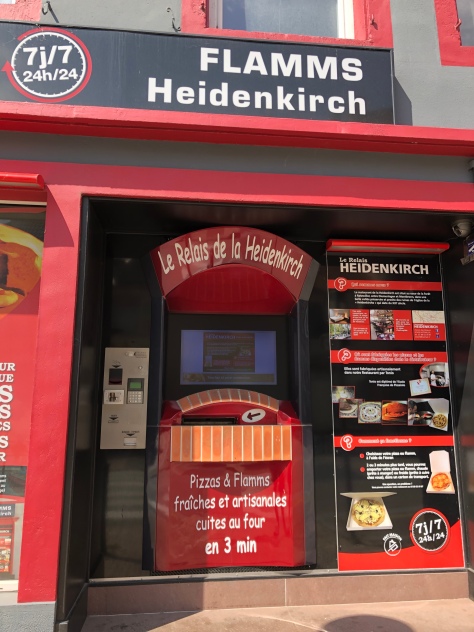 Have to say the vending machine pizza was tempting.

The climbing started almost immediately – and lacking a granny gear the incessant descent into a valley and small town followed by a horrific climb, was torture to watch as Lamby tackled them. In the distance the Vosges loomed – and tbh, sun aside, it was a bit terrifying. Through descent and climb after descent and climb we moved closer to the hills. The target of safety being the town of Saverne.

With 10km to go to Saverne we knew by the switches on the map that climbing was inevitable and the fear was building. Particularly when we saw the sign announcing the Col De Saverne in 1km. Almost unbelievably, due to the fact we had been climbing for 20km – when we got to the Col, we were already at the top!! Happy days. And the switches were on the descent – less so – for me. Blooming hate going down hill – brakes screaming, rims on fire. Lamby 5 miles ahead!! 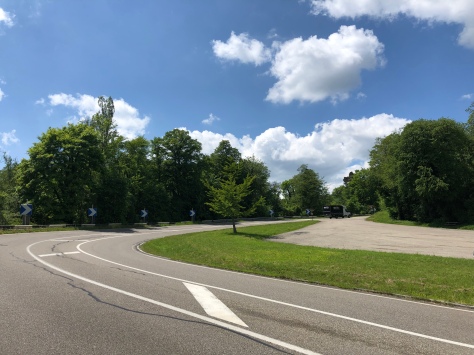 The town of Saverne was stunning and the canal running through the centre filled us with huge joy.

To be honest the ride from there to our campsite in Strasbourg was a joy. Just awesome canal paths pretty much all the way – boring I know. 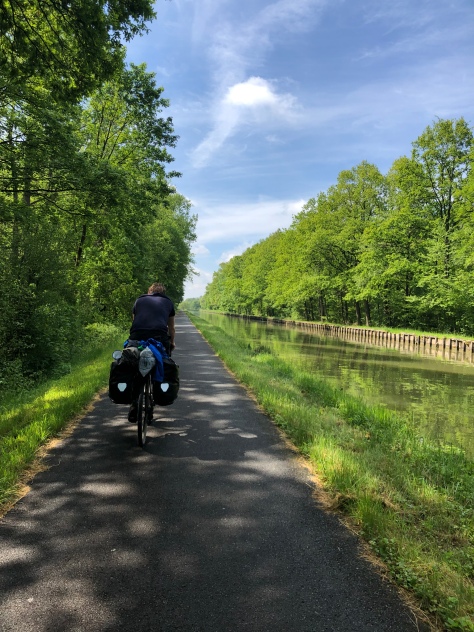 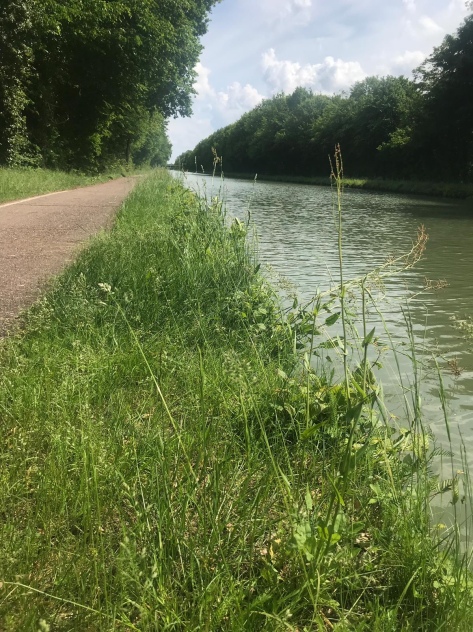 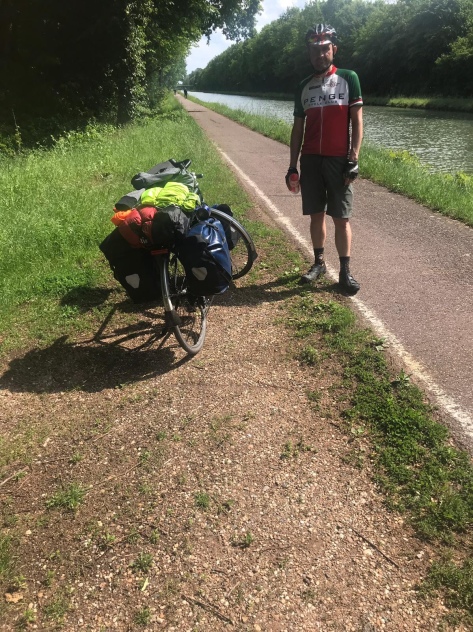 One bit of carnage – the campsite was full. And so, after a beer, we booked an emergency hotel – right in the centre of town. Standard motif!!

So with nothing else to say about today other than it being great I thought I might write about a few of the chats myself and the Lamb have as we ride. Or indeed events, I’ve been to tired to document previously.

1. On the various trains around the abhorrence that is Belgium – we chatted Fonts!!! Yes, fonts. Calibre light being the choice of the lamb. ‘It’s the most clear font’, ‘none of the implications of bureau grotesque’. The lamb loves fonts!!

2. Hotel in Mons. We bought a ton of breakfast type food for the morning. Before sleep, Lamby necks 6 whiskeys (I’m asleep), and then proceeds to eat all of the food. And yet, still complains when I wish to stop for breakfast… standard motif.

3. The motif of trying to get 2 fully loaded bikes off and on Belgian trains – total sketch. Extreme stress, and pain. Though, in fairness, the train staff were excellent.

4. Belgian train drivers pulling into the platform whilst chugging on a fag out the cab window.

5. Lamby bonking ( running out of energy on the bike). A daily occurrence – but he never bonks… ever!!

6. Turtle heads and crowning… again a daily occurrence. Not me guv.

7. Me chasing anyone on a bike that goes past us. In an effort to show my sheer power. In particular, drafting a bloke on an e-bike for about 10 miles down the Saar yesterday, then once he realised I was in his wheel, I burned him off – oh yes!!!

There will be much much more. For now. The cathedral and some of Strasbourg – love it. 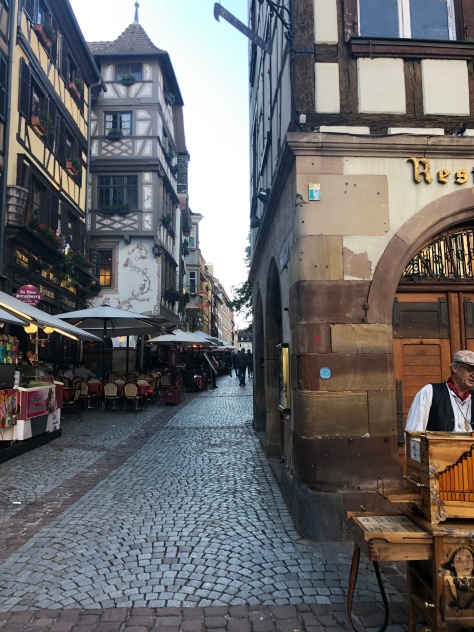 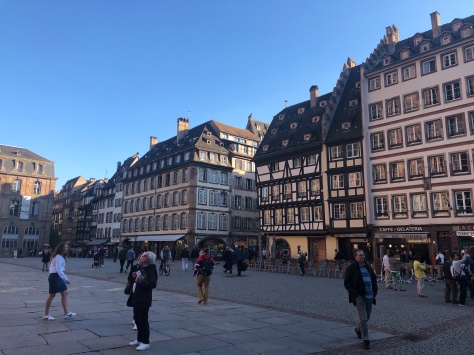