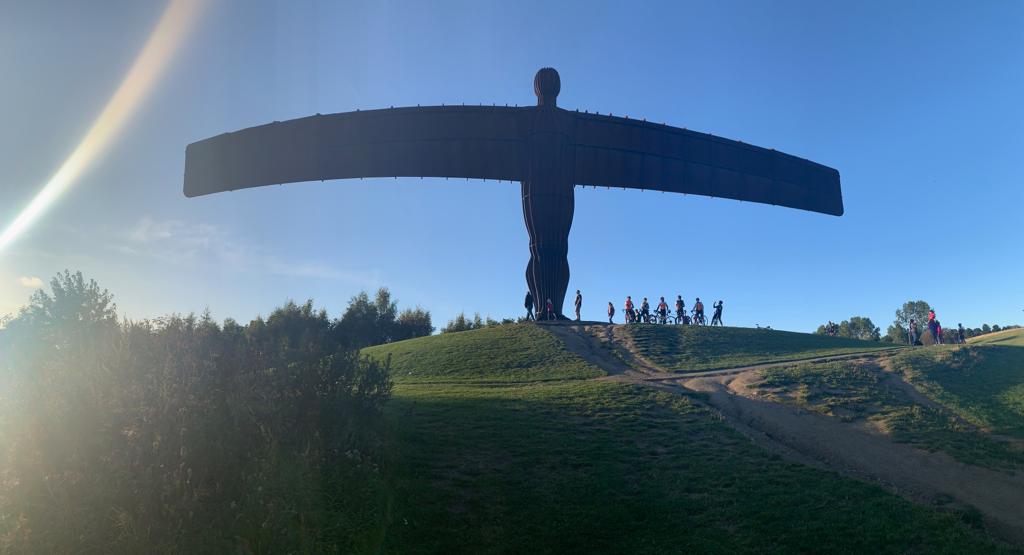 I honestly don’t know where to start with this. There are hundreds of stories from 41 remarkable people, and for me to try and cover off all of them is just impossible. So I’ll try and get as many of the brilliant photo’s up in this post, and tell our story as best I can – in my usual rubbish way.

It was a year ago when I was (most likely) sitting in my pants, probably nursing a hangover, watching the Great North Run that I had the idea to try and take part in it. I knew the only way would be to do it for charity and so I contacted the MS Society. I quickly realised that most folk wouldn’t really consider me running a half much of a challenge – so I thought maybe if I rode my bike from London to Newcastle and then run it, I might be able to raise some money. Being a social beast – and thinking it would be nice to share a beer after each days riding – I got to asking around if others might join me. 37 did!! Race Against Tyne was born. I’ll say this – I still never actually thought it would happen – at least not until 06:00 last Thursday morning – Day 1.

Day 1 would take us from London to Peterborough, a decent 90+ miles. I don’t think anyone of us standing there for the picture above had any idea what an epic, emotional adventure awaited us.

We were joined by Abigail and Kevin – driving the support vehicle – and what a splendid job they did throughout. The days riding would take us out through North East London, into Essex, across Hertforshire and into Cambridgeshire. Destination Premier Inn Peterborough.

We stopped in Puckeridge for the obligatory coffee and cake. Not sure the cafe owners knew what had hit them. And the poor bloke at the back, in for his daily pot of tea must have been incredibly bemused/horrified by the swarm of RAT riders taking over.

Lunch would be in Huntingdon, the back of the day’s riding being broken and from there it wasn’t too much further to make it to Peterborough. Day 1 was complete and all were present and correct. The day perhaps having taken it’s toll on Ben G the most – him having sadly been turned into a zombie.

Before I plunge into Day 2 it’d be worth noting that on each night we stayed in a Premier Inn – and they were all fantastic. I’m posh, but even I thought they were great. And to be fair they were brilliant with all of our bikes, food, and ahem, some people’s (can’t think who’s) partying on night 4. All of this had been sorted by Craig – and I think he deserves special mention here for sorting all of that, and more, but mainly for dealing with my stresses over the last year of organising this – hats off to you my friend.

This was a brutal day. Making our way into a massive headwind all day for 134 miles was hard beyond belief. We had to summon up all of our strength, ride in groups proper, and, in my case, bring in the big guns – welcome Dominic for 2 days of cameo, life saving appearances.

To be honest much of Day 2 is a blur – a mad hurricane of noise and effort – so I’m struggling to recall it all – perhaps too traumatised.

We were riding in 4 or 5 groups and it was largely attritional getting to York. We traversed Lincolnshire and into Yorkshire. All with a smashing headwind. Gainsborough, Epworth and Snaith all providing stopping points. Oh! In fact one group crashed a WI coffee morning for their nutrition – who then went on and sponsored us. Love that. Other highlights… Katie’s very civilised cream tea, and Alison’s cookie.

The day also saw our first, and really only mechanical. Kate’s front wheel losing a spoke and buckling. Fear not though as the support crew of Kev and Abigail were with them, with a replacement wheel in minutes – eat your heart out team Sky et al.

That aside though, the day was not without it’s casualties, with some superhuman efforts taking their toll. Dave Kennedy (Legend) – made it to the end, but not without absolutely destroying his knee. His artificial knee – the legend could barely move by the end of the day and it spelled the end of his riding. Sudhakar, probably the newest in the group to cycling and running made it to the end – but would struggle to get back on the bike the next day – no wonder – and another legend. He’d go on to complete his first Half Marathon after 2 days of riding 230 miles!

As the ride progressed it was clear we were getting into groups of similarly gifted athletes. For me this simple Human behaviour was one of the best things. Seeing friends from all strands of my life riding along together, getting to know each other and supporting one another was powerful, also a bit weird. For instance Katie from work riding with the Long 4 beasts (you know who you are) from penge CC, Lamby riding with Emily and Clare.

We got to York, eventually – and learned in the process that upon entering York, it actually is another 10 miles before you enter York – annoying.

For me, the best day of riding. 50 miles flat, followed by 50 miles hilly. Of course, really it was all down hill 😉

We approached day 3 with a rather laissez faire approach – all setting off later than the previous 2 days. Perhaps being a bit blasé given it was our last days riding and only 100 miles. We set off in our, bu now, established groups and pedalled off into the headwind.

Ben G set off an hour before us so he could stop on the way to take part in a Park Run – take part and win a Park Run in Easingwold. Nutter. He’d join on to Emily and John’s group later as they rode through.

The group I was in employed Dominic again, well Dominic and Ben B, to lead, and take the now customary headwind for the group – Chapeau. Dominic would leave us after 40 or so miles, his job done – and great to be riding with him.

One by one the groups stopped for coffee/breakfast/lunch at a delightful lakeside farm shop/cafe.

My group were last there and as we strolled in discovered that Tom le Bas had been deliberately hit by a car – his frame (thankfully steel), still functional – but only just – Tom, and their whole group were shaken – but not beaten and they ploughed on. Wouldn’t be Tom’s only issue as the crash had bent the frame, and therefore the chain and so more roadside fixes were required later on this day. It was quite worrying to see that Lamby had taken on the job of mechanic as our group pulled up alongside.

The last 40 miles of today’s ride were beautiful, beautiful but pretty hilly. I loved it, made such a change to the flat and windy parlours that had come before. For some though this would represent a massive challenge – as the whole ride itself would. I’m thinking here in particular of our youngest and oldest riders – Toby and Clare. And also much praise to Zoe – pretty much brand new to riding. Them 4 along with Sudhakar and Dave K deserve special kudos.

In the end we all made it to Newcastle – CHAPEAU – and HURRAH!! But before I add in the pictures of the Angel I should mention the routes we rode themselves. They were absolutely fabulous – and I think all of us would ride them again (perhaps praying for no wind). They were all put together by Luke – and he did a sterling job – top notch work Latte.

And so to Day 4, and the small matter of the Great North Run. And boy was it great. To be honest I don’t think any of us imagined just how big it was as an event – just mind blowing. And I don’t think any of us realised just how emotional it would be to complete – which we all did. Quick mention here that we had a Kennedy sub in the group by now with Jordan running for his hobbled Dad, Dave. Also we were joined by Jodie and Hanna – both great friends – and great to be running with them (albeit in a crowd of 57 thousand).

I say emotional, and I mean it – I, and many of us, were in tears as we crossed the finishing line. And as each member of the group made their way to our meeting point I broke down again and again and again. We had made it – we had cycled 340 miles to Newcastle. Hard hard miles at points, and then we had ran the Great North Run. Not only that we have raised (if you include gift aid) over £33k – which absolutely takes my breath away. I’ll be honest, I’m welling up now just thinking about it.

I’m an incredibly lucky person to have so many great friends – and ones that are literally lunatics to join me in this. I thank all of them for an amazing 5 days.

I’m proud at what I have done, and what each and every one of us achieved over those days. I get the feeling for some this will be life changing – I know it has for some. For others, just an immense story to talk of down the pub for months to come. For some this has been the furthest North they have been, for others they have lost stones and taken to running just to be a part of it. For a large amount they could never have conceived running full stop. Whatever it is – I hope, but do think we all had an immense time. And finally I’m told my Dad would’ve been proud – for me, this was for Dad.