So day 1 ended well. We got to the campsite, set up camp, and, remarkably for us 2 – we cooked. Overall a very successful day.

I awoke at 05:00 to the sound of rain, thunderous, massive rain – and from inside my tent it sounded like the sky was falling in. So much so in fact that I held in the loo visit that was urgently required for another 4 hours!!. At 07:30 Lamby and myself shouted to each other through our tents and agreed that we should stay indoors so to speak, for a while until the rain subsided – we fell back asleep and when I woke again at 10:30 – bursting – it was still pouring. We had little choice and decided to de-camp, get on the bikes somewhere warm in Dunkirque and make a plan. We chose Subway to be our office.. 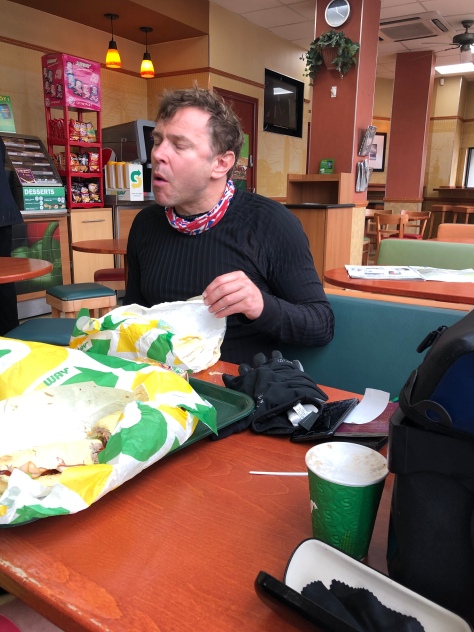 Rather worryingly so did a bunch of child like soldiers…with at least 2 guns each..

We decided we would ride to Ypres and make a plan from there. And so off we set into the pissing rain. 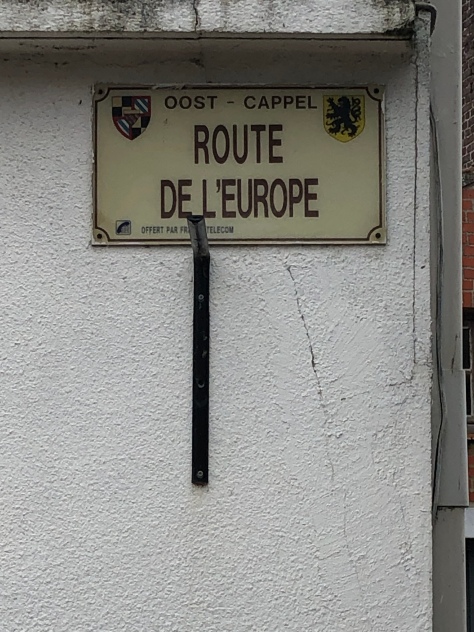 The ride (30 odd miles) to Ypres was brutal. Flanders has not shone on us, or itself, at all. Stinking headwind and lashing it down. Progress was slow, and painful. The major highlight being the border from France into Belgium on the Route De L’Europe.

We arrived in Ypres at 14:30, still raining and by this point, 4 hours behind with 70 odd miles still to go. Wasn’t happening and so for the second time in 2 days we sought other means of travel.

I’ve decided not to be ashamed that it took us 3 trains to get to Mons and catch up on ourselves. We are on holiday, and the riding today just wasn’t fun. Notwhithstanding that, the riding we did do was tough and an achievement in itself. I’m going to take that.

We are praying for dry tomorrow – and a proper start to the adventure on bikes. For the moment though I give you Davey and Lamby’s inter-railing adventure, with bikes.

Ciao for now. We’re off to get fed, watered and focus on proper riding days ahead.

1. Why do Belgian railway stations not have lifts? Most people doing inter-railing have wheely cases. Some folk have multiple wheely cases… we have bikes and panniers weighing a ton. Carrying them up and down the stairs was an absolute nightmare.

2. And some will like this. The sight of Lamby using his mug to bail out his tent in the morning was uplifting and also probably did it for us in terms of how the day panned out.

3. Cigarettes… buckets of them… and in particular the imagery on ‘Splendid’ – I think not.

4. The stations may be awful, but the conductors are legends. Top folk, with no issues on 2 blokes, looking abismal, lugging masses of bike and bike associated stuff on their trains.