Today was my very first taste of an alpineesque climb, complete with switchbacks, steep drops, stunning views and a degree of torture! It was also my first taste of an official Tour De France climb – the Col de Balloon D’Alsace. in fact it was the very first official climb recorded in the race, with Rene Pottier the firtst man over it. A monumnet stands at the sumit in his honour.

i always new it would be a fairly big challenge and a tough day – in the main people who cycle up these mountains do it on carbon road bikes that weigh next to nothing, not on a steel framed tank with a tent, gypsy bag, and 4 panniers with clothes, computers, cameras etc etc… However the day turned out to be even tougher than I expected from the start.

First up my bike chain needed some attention, as I knew I would have problems if I didn’t get it cleaned etc. So the fist mission was to find some degreaser, and a cloth. Couldn’t find any degreaser, so settled for a toothbrush and a cloth – which did the job. No sooner had I sorted (ish) this, thank Luke’s bike (gnasher) started making a weird clicking sound from the rear wheel, after around aan hour of trying this and that – i figured it was a spoke, which is serious, so we precceded at a slow pace looking out for a bke shop. The guy in the shop was amazingly helpful, but did take around an hour trying everything else, except lookinng at the spokes, to tell us it “is a spoke”! We borrrowed a spoke key and sorted it oursleves – at least we thought we had. By this time it was 12:30 and we had left the hotel at 08:30, so quite a frustrating start.

The climb itself was amazing and daunting in equal measure. As i mentioned it was my first climb of this size and as i ground my way up i was wondering when it would end. Every corner revealing an even steaper, longer section. 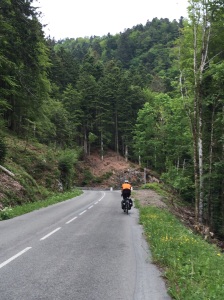 The whole time fighting my way up I had one eye on my garmin device, which was telling me my altitude, among other things. As i pased 1000 metres I have to say a small internal celebration was going on. Also I am pretty scared of heights, and a mad worrier, so was constantly fearing altitude sckness, or a wolve attack – they have them here apprantly! After a climb of around 2 hours we made it to the summit – not the highest climb by any means, but higher than anything in the UK and no panic attacks, or Wolves in sight. Not bad for my first attempt – and as I sit here wrestling with rubbish internet, I have to say I am pretty proud of myself.

Going to leave it there as the connection here is rubbish. Tomorrow we climb an even higher peak, whicvh will no doubt have even more terrifying decents – my biggest weakness on a bike, but more ofd that then. To wrap up some more photos. And one piece of advice, bring some food to campsites or eat somewhere near en route. This eve we had a cold can of ravioli and a packet of crisps for dinner – not ideal athelte’s food, but we found it quite funny. Oh, and Luke’s bike is still making the noise! 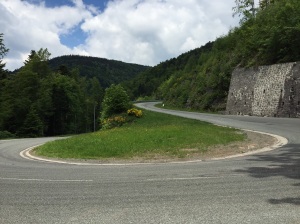 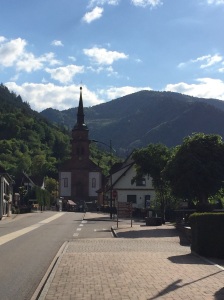