Yesterday’s ride was roughly split in two. Miles and Miles of Levee cycling followed by some chaotic Italian main roads to the coast. Has to be said that I don’t particularly have much to say about the ride, other than the fact it is largely the last ride of the trip. Tomorrow we will be riding a bit and using ferries to get across the Lagoon to Venice.

Levee cycling is excellent – primarily for the stress freeness of it. 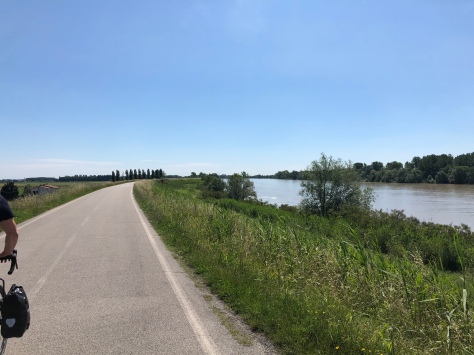 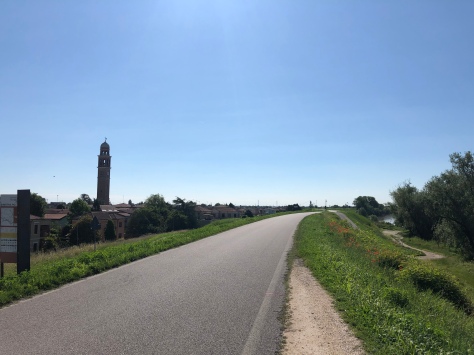 We were rolling Italy’s most cycled bike route. The Itinerio Ciclopedonale RO1 Sinistra Po. The route runs the full length of the Po pretty much crossing the entire North of the country. Quite fancy coming back and doing the whole route. 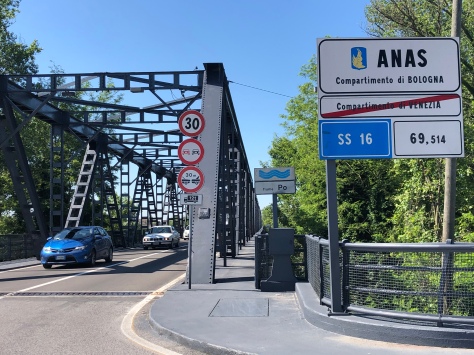 I am keen to do some more exploring in Italy. Don’t feel I’ve done it justice on this trip, or before. Think I have an understanding of the mountains – but am clueless about the rest of it. I will definitely be back… 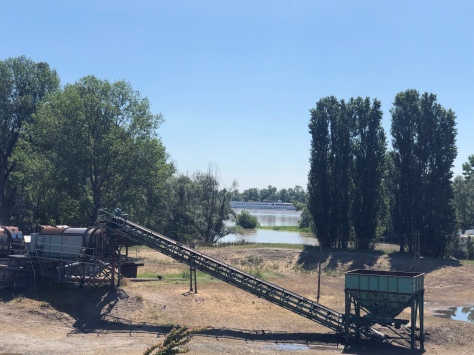 I say stress free…. This is not however:

I blooming hate snakes… and am now convinced we are surrounded by them.

We got out the campsite (no swinging to my knowledge), quite early, and without eating. Always a bad motif this. Lamby doesn’t mind that – at least he thinks he doesn’t. But me, being an athlete and all that, knows the importance of proper fuelling. Yesterday’s entire ride was done on 3 cans of coke (bad) and a pre-packed croissant (echoes of Romania)… To be honest I was done in by the time we made the campsite.

As is customary on these trips, we stopped in town for a beer before heading to the site. The bar, In Anguriara, was quality. As was the owner, Davide. A keen cyclist himself back in the day, he was quick to whip out his bike and get some snaps of the 3 of us with our bikes. 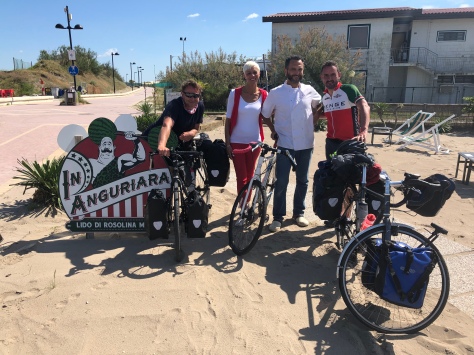 I didn’t get his wife’s name – feel bad about that, but they were both lovely. He clearly knows a thing or 2 about marketing as before we left he gave us both goodie bags – with t-shirts etc… Lovely chap.

Meeting folk is for me the best part of these trips. Always enjoy getting a sense of the people and their life’s as we cycle through their manors. For instance the previous night’s weird family campsite – had 2 grown up boys in the family. One, a Noel Gallagher look-a-like used to roadie for Oasis – and was just about to head to Manchester for some big gig there tomorrow. The other a singer songwriter – sitting strumming his guitar whilst tending the ‘bar’. I say tending – but there was a bout 4 people there, he was not rushed off his feet. Was clear, that even although the site was empty – they are doing well for themselves.

There are good and not so good people all over the world. The campsite we’re staying in here for 2 days, perhaps falls into the latter. Given that we had pre-booked – they still tried to charge double the agreed. Could have been an honest mistake – but I’m not so sure. Perhaps the alarm bells were already ringing as we cycled into the site under the flags of France, Germany, Europe, Czech Republic, Poland….No Jack (not that I’m keen) – or Saltire for that matter. A lot of places we are cycling through have flags outside their establishments and I have to say not one has had a British flag hoisted – it’s as if we’ve left already.

Saying all that – the sun is shining and the beach fantastic. We’ll have a couple of days here then finish the journey off tomorrow as we head to Venezia. 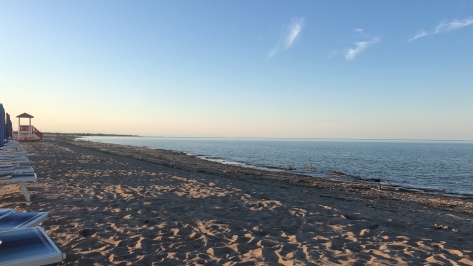 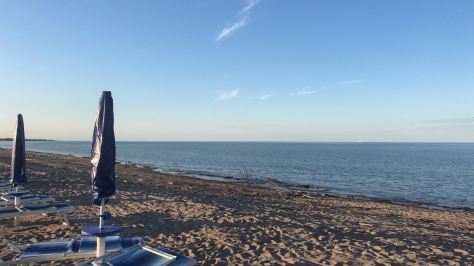 And apologies for these disturbing photo’s 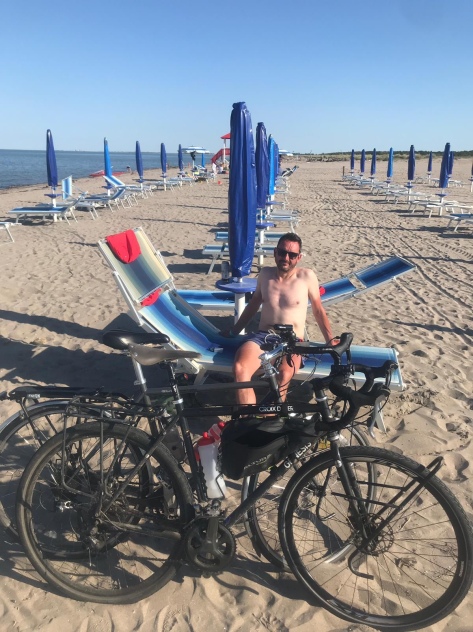