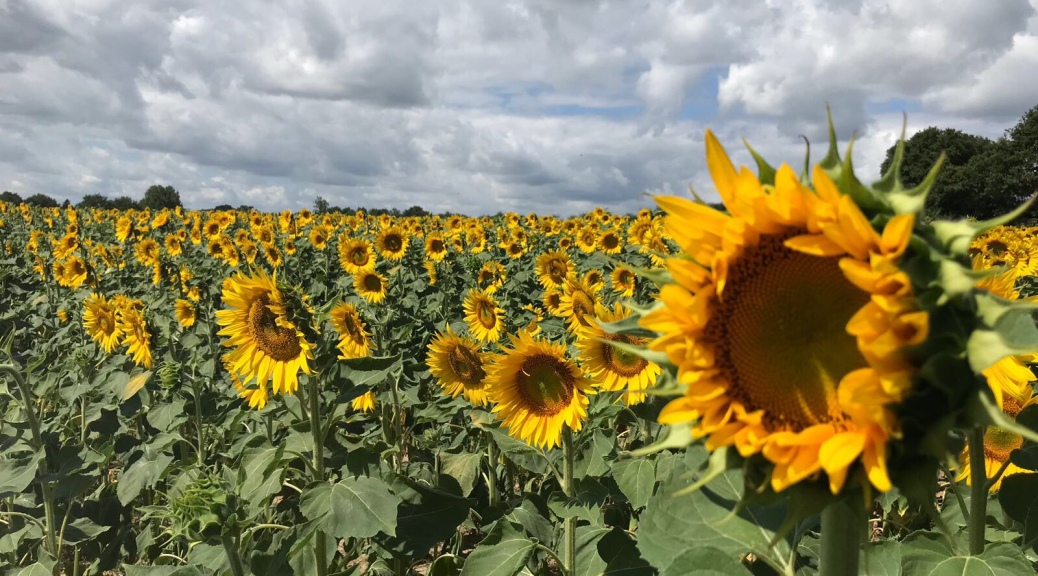 The sunflower is amazing, brings a smile to any face… And yet… 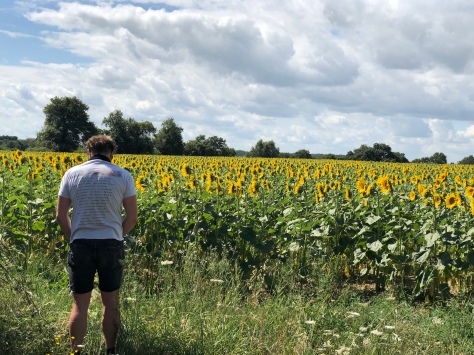 Today we pedalled from Bretagne, crossed the Loire in Nantes, and onwards to the Vendee. 83 Miles was daunting – based on yesterday’s struggles, but it turned out to be quite the opposite.Still haven’t really figured out why some days on a bike you think will be awful, are great, and others, when you’re feeling great, are awful. We’re a group of similar abilities, at least on a bike that is, but the stead’s are worlds apart, at least, 3 of them are, they are very very different to Matt’s. This leaves Matt at a huge disadvantage – and he has struggled. Also, he hates the idea of organised riding. Thus, no helmet, no Lycra, largely no bike!! Well, the same bike he always rides, secretly I love it, but also hate it. Anyway, he hates being ‘corralled’ into a so called riding train – but, in the interests of getting to the campsite with time to relax, we have decided to have a bash. Me subtly ensuring Matt was right behind me, Rob sitting right in Matt’s wheel, and Luke, well, Luke floating about. It worked…We blasted through today, I say blasted, but we were far faster than yesterday -and it felt good. 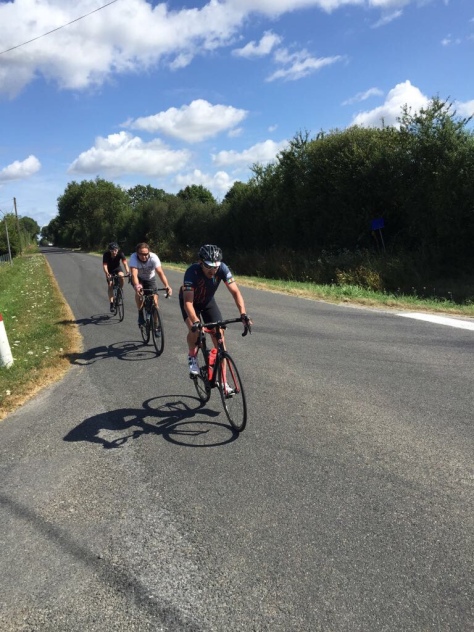 The roads today were just awesome. Incredibly straight, made to be ridden. The French countryside amazing, and the road surface as we pedalled south, just brilliant. We did 50 before we got to Nantes and stopped there for some Lunch. 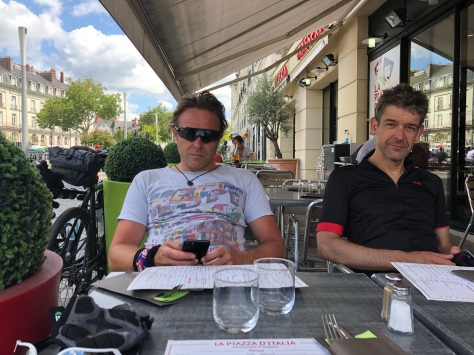 Nantes is special to me, was the first stopping point on my first cycling tour – and thus, as we crossed the Loire (which I love), I can now say I have cycled from London to Istanbul. On my first tour I caught the train from St Malo to St Brevin…Although it was another long day in the blistering heat, it felt great. And we made it to the campsite in good timer. Kevin and Abigail already there, doing a sterling job of supporting and setting up base camp. 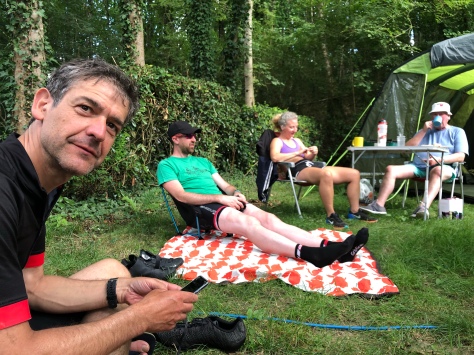 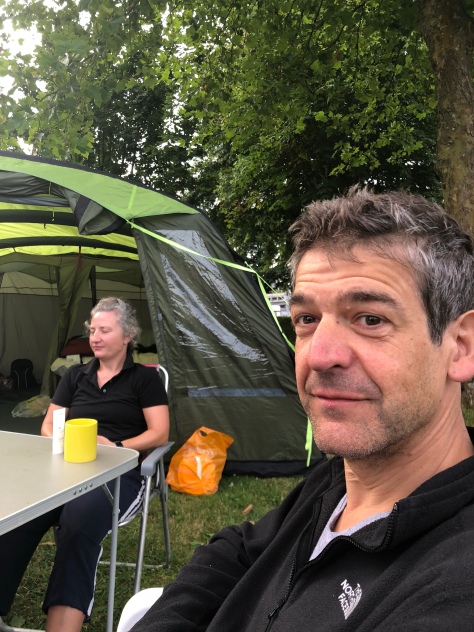 Some good things happened today on the road, but the best happened in the campsite. Rob managed to set up his tent, all by himself. This showed incredibly learning skills as yesterday it took him and Abigail (a gifted tentsmith) about an hour…possibly more. Rob is great, I got to know him loads on the London to Paris trip I helped organise last year at work, and I’m glad I did. Absolutely top bloke. Hopeless with technology, and literally anything where your hands might be involved, but that’s not his job. His job is to sell books, I think (cover your ears my Hodder brothers and sisters), he does that well for his publishers. His real job, at least on this trip, is to take the lead in the last 15 milked of each day, to provide a joyful, naive, excitement about each pedal turn…but mainly to rejoice at the setting up of his tent. He’s awesome – they all are. 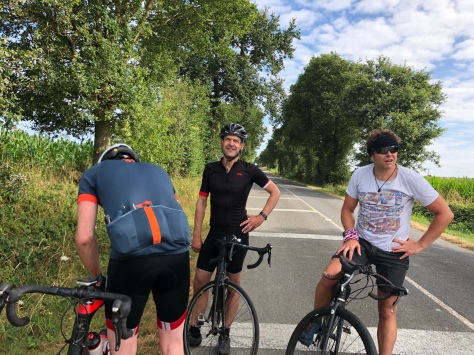 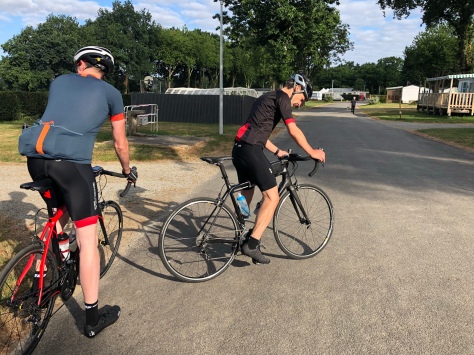 So tomorrow we ride to Rochefort – And I’m looking forward to it. Were making progress. The group is strong. We might just do this. We definitely will if we drink more of this fantastic beer. 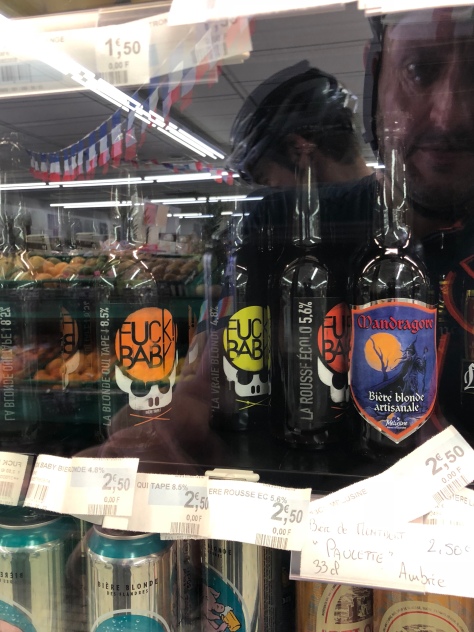