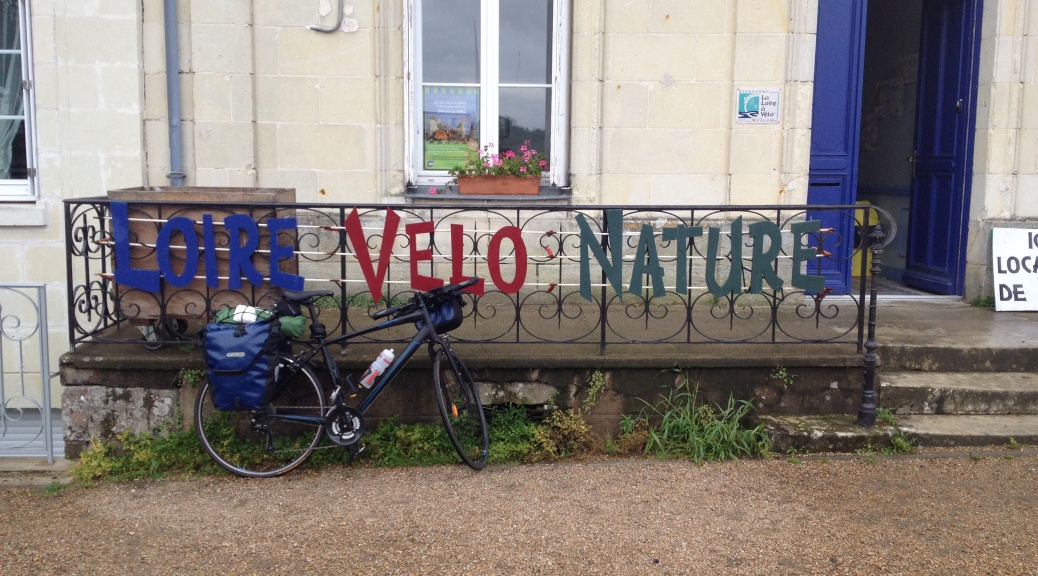 Today started OK. Considering the absolutely awful night I had had. In fact I even asked a fellow cycling camper in Saumur, out of desperation, and a need just to talk I felt so bad, for advice on the route, and whether it was a cop out to get the train. They said no, sort of, but I thought it was. In any case I was feeling a bit better. So I drunk loads of water and stopped by a boulangerie before I left town. Bread was all I could eat – but given the 50 miles ahead, I had to eat something and so forced it down.

I had already decided to take the roads instead of the EV6, they are busier, given the EV6 is in the main cycle only, but they are far more direct. Also, if I was suffering bad, i could eat, find a toilet, or even a train station.

I needn’t have worried, the cycling today was spotless and superb. the roads were perfect, and French drivers are more considerate anyway. I mixed up more major roads with country lanes, all the while trying to keep my route as direct as possible. We went through some beautiful towns. Candes St Martin was recently voted the most attractive village in France:

For a while after Candes we were on the river Vienne, before crossing it to get back to the Loire. Mad as it sounds i found myslef talking to my friend Miss Loire when we got back to her, apologising for my brief sejourn with another river!

Soon after passing the awful and masive Chinon Nuclear power plant we were back in the normal tranquility of the Loire valley countryside and the castle at Usse is spectacular. It is considered the castle on which sleeping Beauty is based:

After Usse, we were back on the country lanes, and in particular a levee road. These are fairly common in this part of France and provide long, quiet, well surfaced roads with amazing views of the river, and the farm land on the ‘dry’ side of the levee.

At Brehemont we stopped to give TZ some air. a treat for him, pictured above at a bike shop on the levee.

Soon after that we encountered our first real pave section. About 1km of bone shaking cobbles – unecessary!

Around 10 miles later we had succesfully made it to Tours. From what I have seen this eveing this is really enticing city. Vibrant and multicultural, and I would definitely like to come back here. all in all a very good day after a dreadful night before.

Here is some Tours